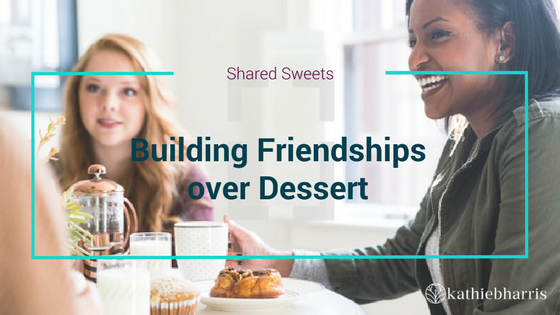 [wp_subtitle]Written by Kimberly Bolden[/wp_subtitle]
Every six weeks or so, we host 12-15 members, a mix of black and white, mostly couples and their kids, in our home. The level of transparency and vulnerability during our guided conversations on race so early on was surprising, yet refreshing. While our kids are forming their own bonds, we examine how our experiences with race have shaped us. As group leaders, we share tools to aid in our discussions; suggested books, documentaries, films and even definitions of terms found on the Be the Bridge site. The discussion is at times, emotional, uncomfortable and raw and we don’t always agree, but we keep returning. We keep sharing.

In December, we shook up our routine a bit and asked the members to join us for a couples’ date night to view the film “Fences.” We chose this film adaptation of August Wilson’s play, in part, because he is my husband’s favorite playwright, but mostly because it centers on the life of a black man and his family in 1950’s Pittsburgh.  The story, one of unfulfilled dreams, of hardship and betrayal, in a post-World War II industrialized city is not new. Told from the black American viewpoint, however, the film offers viewers a unique portrayal of generational trauma being passed down.  While exploring the detailed themes and symbolism, most members could relate on some level to one of the characters.  Either they were reminded of their entire family’s dysfunction or saw similar behaviors in a relative from an older generation.  Being a Pittsburgh native, my husband knew this film would offer our white members a rare glimpse into the heart and soul of his culture and upbringing.

Two of our members were eager to share what they hope to gain from participating:

“I joined the group for many reasons, not the least of which was that – having grown up in a very white world where African-Americans were almost always in subservient positions – I was grateful for an opportunity to learn more about the African-American perspective, and building bridges between communities, families, and minds, especially in the midst of so many police shootings and the Black Lives Matter movement the past few years.

My kids are almost out of the house, but I also wanted to gauge what I did okay on in teaching them love and tolerance, and where I could have done WAY better! (And there’s a lot of room for improvement…maybe I’ll have grandkids one day?) With Trump being elected and the growing incidents of hate since, I have been even more grateful for a group of people who actively want to connect and work toward peace, understanding, and justice. This group is a wonderful way for me to get to know amazing, diverse people and to talk about sensitive issues in a safe place.

I suppose it is a little strange for me to be the one of the only people in the group who grew up in an almost completely white world with a clear undercurrent of racism… but, I am glad to bring that perspective, if it helps the group. I wish it hadn’t been that way, and I in no way justify it, but it is all part of the issue of race relations, and working toward a better world.”

The Value of New Friendships

“We (blacks and whites) just do not know how to talk and listen (with our hearts) about race and the impact of slavery. There is a tremendous amount of shame and guilt and also, the fact that a lot of people simply are not convinced that the race issue is a real issue at all. That is the biggest issue to me. Once people accept yes there still is a race issue, what do you do with it? That is a question that is bigger than the group. The hope is that folks continue to come, truths continue to be shared, perspectives continue to widen and prayerfully, hearts will soften and shift.

I have found that when I share with folks about our dessert time together people are really interested and ask many questions about how it’s managed. The big question in the room–the one that folks really want to ask first but take time to lead up to is: why? Why are you spending time to meet — do you think it will matter?

After this election cycle–almost two years of shocking and hurtful rhetoric, I think that the question for folks is even bigger. Why spend your time (which is precious) to talk with other people (across the racial aisle) about race in America? 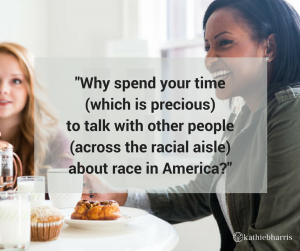 I don’t think that getting together with folks who are different will help our race problem. I really don’t believe that at all. In fact, the truth is that we are a nation that is around different people quite a lot. We see and are around other people at work, in schools, banks, grocery stores, etc. I have also been around people who have gathered to talk about this very issue. And even in those groups–with a racial focus, not much change. So, no, I don’t think being around different people will bring about any healing or true change. So that is not why I participate.

I am participating because I hope to, over time, be called a friend. Friendship, especially when it deals with someone who looks different from you, takes courage, intentionality and time. Through friendship amazing things happen–walls–big and strong–can actually fall, hearts can be softened and beliefs can be changed. A good friend sees you and values what they see. A good friend cares deeply when you are hurt–even if they can’t understand the source of the pain. A good friend listens and tells you the truth, uses their privilege for your good, and is transparent and vulnerable. A good friend shares what they have, protects you from harm and danger, shows up and stands up for you. A good friend loves well.

I have experienced this personally many times over. I have many ‘other’ friends that are my sisters and brothers. I know also that because of my relationship with them, their views and opinions of African-Americans have shifted. On the other hand, some of my relatives’ views about white people have also shifted based on my friendships.

My husband and I recognize that bringing black and white families together for dessert in our home each month will not cause a shift in the racial climate. We emphatically believe that nurturing cross-cultural relationships will. Revealing our messy truths involving race and acknowledging our biases without fear of judgement, in a non-partisan setting, will erode barriers erected long before us. Removing these invisible, yet palpable walls, allowing us to truly “see” one another will, over time, foster unity and form loving friendships that bridge the divide for us and our kids. 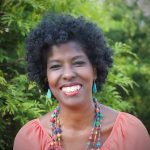 Many know me as a loving wife, homeschooling mama, entrepreneur and former intelligence analyst, but first and foremost I am a follower of Christ. I didn’t realize it at the time, but looking back on my educational and career path, I can clearly see how God created a passion in me for fostering cross-cultural awareness at a young age. Having become proficient in Spanish in my youth, I went on to learn Japanese and Korean languages, culminating in a B.A. in East Asian cultures with a minor in business. My honest-to-goodness dream was to one day establish a foundation to educate our youth about the history, traditions, and people of Japan, Korea and China. Little did I know God would use that desire for bridge-building much closer to home. I believe we work towards educating, healing and loving one another, as God intended, by being intentional. My husband and I host monthly, interracial dessert groups with the goal of removing the stigma of discussing race in America, and building relationships, one conversation at a time. 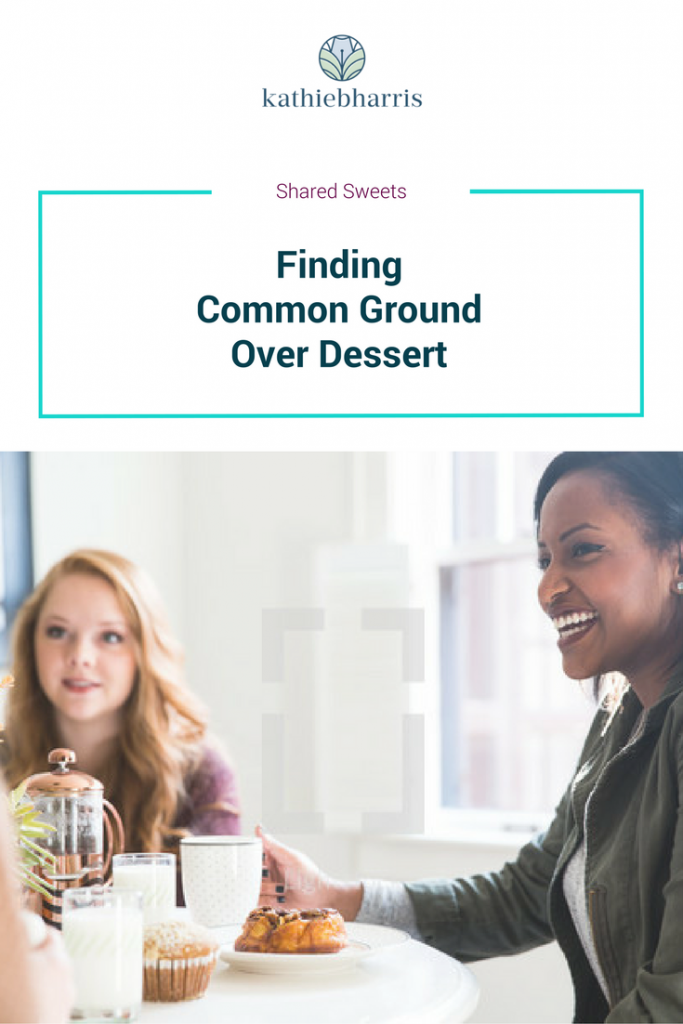