Jordan Edwards’ name will now be added to the long list of unarmed children killed by police. I can’t help but think how much meaning his life had before it was stolen from him.

Jordan Edwards was known for being the happy kid in his family, a boy who brightened classrooms with his smile. He was well-liked by many, so many are suffering his loss.

This is a kid who had the grades, solid family foundation, and even the socio-economic privilege to succeed.

But it was all worthless, because he was seen merely as another dark-skinned male by a man with a gun and, what we will likely find, a bias against black people.

I Am Jordan Edwards

When I think of this 15-year-old kid, leaving a party that got out of hand, it reminds me of me. I’ve actually been there. I was 16-years-old, hanging out with a friend I normally didn’t, and she exposed me to a world that was entirely different from my straight-As and church-service world.

There were drugs. There was a Denny’s run at 2 a.m. when a fight broke out. There were cop cars zooming into the parking lot as I escaped by seconds in my Dad’s truck with my friends.

Just like Jordan, I was a good kid, caught in a bad situation. But I lived to tell the story and he won’t see his 16th birthday. 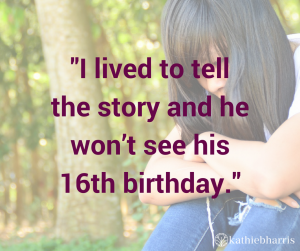 I’m exhausted by the victim-blaming in these situations. We can’t wait to pounce on some small thing that we can point to and say “well, that’s why they were killed.”

His background shatters the archetype of a black teen gunned down by police. And yet you will still find someone saying “he shouldn’t have been at that party.”

Stop. Just stop. Jordan Edwards was killed because he was black. Period. It’s that simple and that awful and we need to stop pretending it’s not.

I shouldn’t have been with that friend, either. The fact that I never did drugs, didn’t get raped, or rounded up in a group arrest is a miracle. Why didn’t Jordan Edwards get the same mercy? Because he was black.

I don’t, for a second, believe I deserved to be gunned down in front of my friends for being in the wrong place at the wrong time. I don’t believe Jordan’s brothers should have to live with the horrific nightmare of watching their brother shot, then arrested themselves.

When I think of what his parents suffered, not knowing where their boy was or what was happening, the entire time being treated like THEY had done something wrong. It makes me sick to my stomach.

There can be no justice for what was done to this family. Even if the police officer is found guilty of murder, the pain will never go away.

If I’m preaching to the choir – let’s lament together! This family deserves our sorrow. They deserve us fighting with them to put away a murderer. Let’s mourn with those who mourn.

Let’s also support our law enforcement professionals. It is a hard, thankless, low-paying job. It is life and death out there. Periods of boredom peppered with intense action. It’s not for everyone. And to those who are doing it right, I thank them and honor them. We can get nothing done in the name of justice without these men and women in blue, and we can’t forget that.

But if you still think this had nothing to do with race, I implore you to look deeper. The reason this has gotten so bad is because so many in power refuse to see the truth. Because we refuse to acknowledge our own biases, we can’t repair them. And children are dying because of our ignorance.

What can we do on a personal level? Start small!

Educate your own kids about other cultures and broaden their love of humanity to include all races and cultures. So, when they grow up to be police officers or CEOs or teachers, they see the person instead of the skin color. It ALL starts at home.

Go out and make friends of other races. Know your neighbors. Be willing to advocate for them. Our biases affect others when we assume the worst of someone we don’t know. Be willing to protect your friends and neighbors from discrimination by speaking up when you see injustice.

Don’t allow your home or work place to be a haven for racist jokes or biases of any kind. Speak up! It’s not easy. In fact, it’s downright dangerous. We may worry about losing our financial stability, but when black families are agonizing about losing their children, it redefines “dangerous.”

As white women in America, we have power, even though it may not seem like it. I honestly can’t even define it, but I know it’s there. We can walk into so many situations and be welcomed and assumed the best of. Because we are white, well-dressed, and the image of American’s cultural norm, we have unbelievable access. How can we use that to advocate for those who don’t? How can we empower those who already have the strength, but need the voice?

Let’s leverage our power to share grace and foster change.

Sign up for the Book Club to Foster Change

As a child I had a passion for justice and a love for history that is still with me. And if there is one huge example of injustice in America's history, it is the story of the black experience. From slavery to civil rights, they have struggled. I've watched the injustice continue through my eyes and the eyes of the media. I believe we are capable, through the love of Christ, to heal the racial injustice in this country. But we have to listen first, to see both sides, to come out of our trenches and stop repeating what we think is true, and actually seek the truth. Door of Hope will take you on my journey of more than two decades to where I am now, and I hope you will join me as we seek to heal.

"... I will give her her vineyards and make the Valley of Trouble a door of hope."

Between the World and Me by Ta-Nehisi Coates Hillbilly Elegy by J.D. Vance

Receive your free copy of "How to Get Started on Your Journey" when you subscribe to receive post updates.